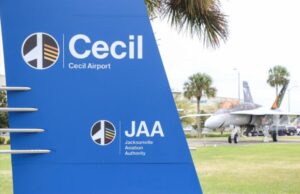 The Jacksonville Aviation Authority is looking for someone well connected in the space industry to oversee Cecil Spaceport — a strategic priority for the organization — but it’s not in a rush to fill the position.

The job opened up when Todd Lindner was recruited to became CEO of Mohave Air & Spaceport in California in April.

“The fact Mohave poached Todd, and made him the CEO of their airport, shows that obviously, there are other spaceports that are looking at what we do at Cecil and modeling our success,” said JAA board chair Pat Kilbane.

Though the posting required five years of spaceport management experience, JAA CEO Mark VanLoh said the next managing director does not necessarily need to come from the space industry. Lindner didn’t.

Instead, what VanLoh would like to see is a person who can both connect with their peers in the industry and have the ability to convince companies to operate out of the horizontal launch facility on the westside of Jacksonville.

Before Lindner left, Cecil Spaceport entered into an agreement with Launch on Demand to be its launch services provider. To date, there has not been a launch at the spaceport, but the combination of having a launch services provider and relationships with private entities Aevum and Generation Orbit led Lindner to be confident that the first launches would take place in 2021.

Cecil is the only Florida-based spaceport that is located outside of Brevard County. Lindner previously told the Business Journal Cecil’s location is a recruiting advantage to companies that may not be ready to operate out of the myriad of facilities in and around Cape Canaveral.

That positioning may make the job attractive, too.

“We are one of the few commercially licensed spaceports,” Kilbane said. “This position is important. We don’t have an urgency to just put a warm body in the chair.”