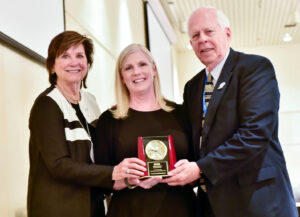 Fairbanks, AK – The Northwest Chapter of the American Association of Airport Executives (NWAAAE) held its 48th Annual Conference in Fairbanks, AK on September 23 – 25. During the conference, the President’s Award of Distinction was presented to Doug and Annell Kuelpman of ADK Consulting & Executive Search.  The President’s Award of Distinction recognizes members of the Northwest Chapter who have served the association and/or promoted aviation with uncommon dedication.  Through their combined expertise in aviation, recruitment, training and business development, the Kuelpmans have built one of the most effective and respected consulting and executive search firms supporting the aviation industry.  Doug and Annell have been active supporters at both the chapter and national levels of the American Association of Airport Executives. The award was presented by NWAAAE Chair Cathryn Stephens, A.A.E.