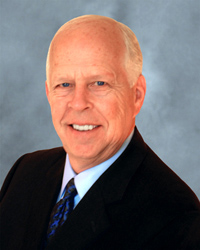 Doug has a passion for aviation and a dynamic blend of business savvy and interpersonal skills. Throughout his career, Doug has utilized his strategic abilities and keen understanding of people to distill complex objectives into measurable goals and results. Doug brings his entire career background of over 40 years in aviation to the ADK mission. He understands firsthand the issues and challenges that airport executives face as well as the requirements and experience necessary for executive level airport personnel.

Much of Doug’s pre-ADK career was spent working directly with the airport community. Five of those years were spent with the Federal Aviation Administration (FAA) in Seattle, WA in airport planning and design where interfacing with the airport managers and their staff from the government point of view was a daily occurrence. With Evergreen International Airlines in Marana, AZ, he served as Director of Business Development. He also served as the airport manager at Marana, AZ, operated by Evergreen. He was VP of Marketing and Sales for Tracor Aviation, Santa Barbara, CA. Finally, for 17 years prior to ADK, Doug was on the Executive Staff of UPS Airlines in Louisville as Vice President in a variety of capacities, including the UPS Airline start-up team, the Airport Properties Group, the Public Affairs / Public Relations Group, and the UPS liaison to the $1 billion Louisville Airport Improvement Program. Doug’s career positions gave him the opportunity to see the airport industry from the FAA’s point of view, the airline’s point of view, the tenant’s point of view and as an airport manager himself. He started ADK in 2003 as a response to a void in the industry.

Other career highlights for Doug include: Graduate of the University of Washington in Seattle (BA Transportation Planning), Engineering Officer in the U.S. Navy, and a private pilot with multiple licenses. Doug grew up in Spokane, WA and is a boater, having spent his childhood summers at Priest Lake, Idaho. He was attracted to Florida for the boating opportunities in and around Jacksonville. He and his wife, Annell, enjoy travel and have 3 adult, married children and 7 grandchildren who live in Atlanta, GA, Miami, FL, and Richmond, VA.