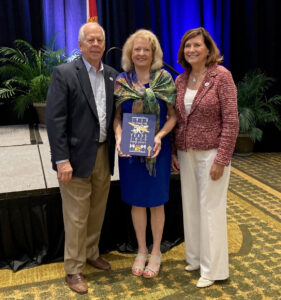 As the winning entry, Mr. Floyd’s design was featured as the cover of the FAC 50th Anniversary Legacy Book. The hard cover book was published to celebrate the history and accomplishments of the Florida Airports Council over the association’s fifty years.

Lisa Waters, President & CEO of FAC, presented Doug and Annell Kuelpman, principals of ADK Consulting & Executive Search with a copy of the Legacy Book at the 2021 FAC Conference & Exposition in Jacksonville, FL.

The Florida Airports Council is the official association of the publicly owned and operated airports in Florida. Originally formed as the Florida Airport Managers Association (FAMA) in 1969, the organization was created to provide the strength of numbers needed to successfully face the major challenges of the industry at that time, and into the future.