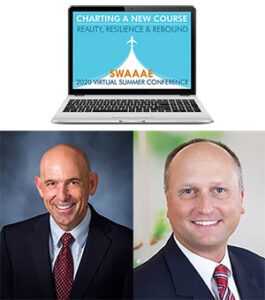 CHANDLER, AZ – The Southwest Chapter of the American Association of Airport Executives held its 2020 Virtual Summer Conference, Charting a New Course: Reality, Resilience & Rebound on July 20-21. ADK Senior Project Managers Rod Dinger, A.A.E., and Matthew Nelson, C.M., ATP, attended the conference where they learned about the best practices in how to best navigate a new reality together.