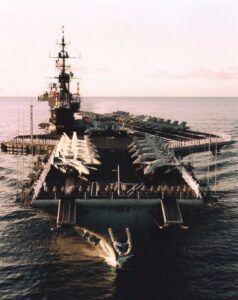 One of ADK’s greatest assets is its team. We like to acknowledge and celebrate our team and especially our Veterans.

Barry Bratton, A.A.E., is a Veteran of the US Navy, where he served as a Naval Flight Officer. During his time in the Navy, Barry participated in cold war operations, tracking Soviet Block naval and air forces from maritime patrol aircraft. During Operation Desert Storm, Barry served as catapult an arresting gear officer aboard the U.S.S. Midway. Ultimately, Barry’s service took him to the Antarctic where he was a polar transport aircraft navigator instructor and evaluator. He served in support of the National Science Foundation and Operation Deep Freeze.

As part of a series produced by USAA, titled The USS Midway Museum: United Stories of America®, Barry talks about his experience on the USS Midway, in particular the teamwork and coordination of everyone on board to emerge from Desert Storm with zero casualties.

We thank and honor Barry’s service, and everyone who has served in the United States Military.

Learn more about the USS Midway by visiting the Midway Museum.