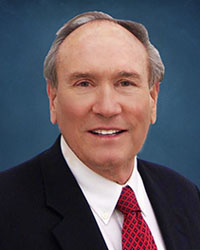 Jim Samuels is celebrating his three-year anniversary on the ADK team. Jim serves as the lead technical resource for ADK. “In my role as the Director of Information Technology, I am generally the primary interface with the software supplier for our applicant tracking system.  A key responsibility is to assist in expanding our central database of human capital in support of our recruitment efforts.”

Fun fact that Jim shared: As a teenager, growing up in Louisville, KY., Jim was asked to punch another young man (Cassius Marcellus Clay) with all his force, in the stomach! He said it was like hitting “A Brick Wall”.  Interestingly, Jim became an avid follower of the many Muhammad Ali boxing matches. Over the years, Jim has collected Ali memorabilia including several personalized books and photos. Later Jim was asked by Lonnie Ali (wife of Muhammad) to become a member of the founding Board of Directors for the Muhammad Ali Museum in Louisville.

Jim and his wife, Bettye, love to travel and explore different cultures including Asia, Africa, and Europe. Bettye taught French for over 30 years, and it remains a favorite destination of theirs.

In addition to over 40 European adventures, they have travelled extensively throughout Turkey, and remain intrigued by the country’s amazing cultural and archaeological sites.  An interesting side note: Upon completion of graduate school, Jim was offered a professorship at the University of Istanbul, Turkey in the Department of Mathematics.

Thanks for all you do for ADK, Jim!