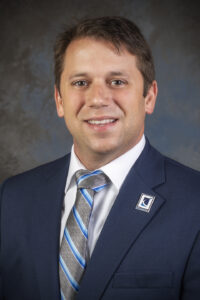 KILN, MS – The Hancock County Port and Harbor Commission has
appointed Chanse Watson as Airport Director for the Stennis
International Airport (KHSA). In his role, Mr. Watson is responsible for
planning, directing and coordinating activities, construction,
maintenance and operations of airport and spaceport facilities.
Mr. Watson began his new position on September 3, 2019.

“I’m looking forward to the opportunity to assist in the continued growth
and excellence of Stennis International Airport, as well as the Hancock County Port and Harbor
Commission,” Mr. Watson said. “I’d like to focus on expansion of airport operations, services
and supporting existing relationships – as well as developing new ones.”
Mr. Watson has worked in airports and aviation for almost 10 years, most recently having
served as Airport Manager of Louisiana Regional Airport in Gonzales, LA.

A Louisiana native, Mr. Watson graduated from Louisiana Tech University with a bachelor’s
degree in Aviation Management. Upon graduation, Mr. Watson interned for New Orleans
International Airport, where he later worked as Airport Operations Supervisor. He also served in
the role of Assistant Airport Director for Lakefront Airport from 2015 to 2018.
Mr. Watson earned his Private Pilot Certificate in 2005 and has plans to complete his
Instrument Rating.