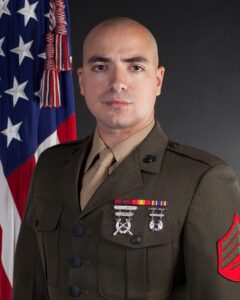 BULLHEAD, AZ – The Mohave County Airport Authority has named Mansour Richa as the new Manager of Airport Fire & Operations for the Laughlin/Bullhead International Airport (IFP). As a Sergeant in the United States Marine Corps with knowledge in planning, developing, and implementing fire department guidelines, procedures, and policies, Mr. Richa brings eight years of leadership experience to this position. Mr. Richa began his new position on September 8, 2020.

“I’m excited to join IFP and work alongside the team of experienced professionals,” said Mr. Richa. “Their hospitality, mutual respect, and sense of belonging bring a positive outlook to employees and customers, alike. As Manager of Airport Fire & Operations, Mr. Richa will have overall responsibility of the Airport Firefighters and Operations staff along with oversight of the day-to-day airport operations. He will also plan, train, and schedule staff, and coordinate and organize preparedness for emergency responses, including emergency response to aircraft incidents, medical emergencies, and fire suppression along with many other emergency responses outlined in the Airport Emergency Plan (AEP).

Mr. Richa joined the United States Marine Corps as a Firefighter in North Carolina. He was named Deputy Assistant Chief of Logistics in 2017 and Station Captain in 2018. He graduated from Louis F. Garland Fire Academy and is certified in Aircraft Rescue and Fire Fighting.