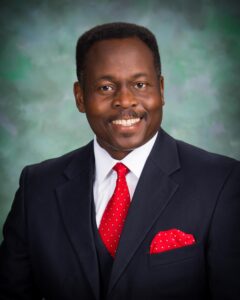 FAYETTEVILLE, NC -– After a nationwide search, followed by an extensive interview process and assessment program from a pool of competitive candidates, City Manager Douglas Hewett selected Dr. Toney Coleman as the new Director of the Fayetteville Regional Airport. Dr. Coleman has served the City since 1993 as the Airport Deputy Director. He has served as the Interim Airport Director since Bradley Whited retired from the Director position in April. Dr. Coleman began his new position on August 3.

“Dr. Coleman has more than earned this new role as Director,” said Mr. Hewett. “During the past years we have worked together, he’s demonstrated his prowess as a subject matter expert in all things related to the Airport, and as a superb leader. He will be instrumental in moving the Airport forward on a positive trajectory.”

As Deputy Director, Dr. Coleman provided oversight for Airport administration, maintenance, custodial, fire, law enforcement, and support services. Before joining the City of Fayetteville, Dr. Coleman served more than 12 years on active duty in the United States Army and an additional 12 years in the Army Reserve while working for the City as the Deputy Director of the Airport. As Airport Director, Dr. Coleman will continue to focus on the Phase I and II Terminal renovations, totaling more than $53 million, and securing new flights for Airport customers.

“To God be the glory for the favor he continues to show towards my beautiful wife Voncillia Coleman, daughters Chanel and Sharee, and me,” said Dr. Coleman. “I’ve been interested in Aviation since my teenage years when I watched the Blue Angels performing at the Smith- Reynolds Airport in Winston-Salem, North Carolina. I believed I could fly and put my faith to work. At the time, I worked as a dishwasher at Holiday Inn and when walking home one evening I stopped by the Airport and asked if anyone could give me an introductory flight. They did, and from that point on I’ve been chasing wings; Airborne, Air Assault, and Aviator!”

“I have been on the Fayetteville Airport Commission for 15 years. I have known Toney not only through my Commission, but also as a member of our aviation community,” said Fayetteville Regional Airport Commissioner Jay Wyatt. “It is a pleasure to see him take the Airport Director position and I look forward to great things to come for our community. He will do an excellent job managing our Airport and leading the staff.”